There are a number of problems that could occur under the name biological disaster where a species goes out of control. Many consider mankind a biological disaster, but humans have prevented many disasters from happening as well as contributing to them. Many species would not now exist, having gone extinct in the past, and it’s quite possible to re-create a species from genetic material. This is not something that can be found or happen in nature.

But is it wise to re-create a predatory type species these days with so many systems in place that could be damaged by the existence of such a species?

Large scale use of mono-species has it’s own risk. Modifications to species happen naturally due to natural selection, but there is always to temptation to modify it to it’s limits, seeing all the advantages and none of the disadvantages elsewhere. You see this with scientific projects where large projects ‘drain’ all the resources that would normally be given to much smaller equally important ones, the scientists involves having an obsession with their own area and grabbing all they can in the area of finance, grants and resources, to the detriment of everything else. Because no area is isolated and unconnected with another, their project is slowed and fails due to area that would have supported and been part of a viable structure. Things that would have been developed and helped their area not being developed.

You find this effect in nature in the form of trees where trees grow and starve large areas around themselves, areas under trees stunted and deprived of nutrients that the trees grab, structurally weakening the area underneath. The trees grow larger and larger, draining an increasing area until nothing but the tree is there with all but a small level of bare existence plant life such as mosses. That is until a parasite or fire arives that kills them, the additional plants and creatures that may have prevented this not being there, killed off by the trees demands for resources. Then, when they are gone, plants start to thrive again there until another tree gains dominance when it dies off again.

So the key to survival is species diversity, especially in the crops you plant and animals you breed. This gives you the biggest statistical advantage that some of the present set of species can adapt to a new and novel situation. Limit the species and you limit your options and spread of survival characteristics. With domestic animals, they are commonly bred to give certain characteristics and are not the same animals they were even 1,000 years ago, changed towards the greatest yield in certain areas, such as meat, milk, skins, medicine production, etc. But this trend also narrows their field of survival. Plants are now being developed to also give greater yields, some being genetically modified for a particular climate advantage, such as surviving in very cold or dry conditions, usually at a cost of survival in very warm or wet conditions and whole areas en-masse are being given over to these new hybrids.

But in the world, the only thing that is guaranteed to stay constant is change, the conditions we see as ‘normal’ probably being just temporary conditions due to our relatively short lives. Take for instance, the ice covered north and south poles. To have them is ‘normal,’ anything else being classed as ‘abnormal,’ but the ‘normal long term situation’ for the earth may be that they aren’t there, so working constantly to the position that they are there may be narrowing our chances of survival, not catering for the likelihood they will disappear and the seas rise.

If you take the last 100 million years we have had the poles for about 33% of that time, prior to that maybe a total of 5% of the time. But of that time, about 30%, we were in glacial periods when europe looked like the map below:

So our current position of mostly ice free europe and the two poles as they are is a condition that has been for the most recent 3%, or one that works out to about 0.5% of the worlds lifetime. We may ignore the other chance of 99.5% at our peril.

But the world seems to be in a heating trend that suggests that sooner or later we will lose the poles completely, methane stored under pressure and ice also being released, so things may end up changing faster and more suddenly than planned. Without the poles you may end up with europe looking like the maps below: 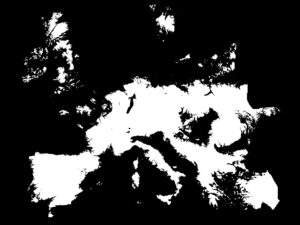 The climates would move northwards, nothern areas warming to a new stable equilibrium faster than those at the equator, a lot of Mid-Africa becoming uninhabitable during the summer months, places like the Sahara becoming fertile again as the forest climate moves position. If there is a feedback on the methane system then this could escalate, start and happen in a very short time period. CO2 seems an obsession of mankind at the moment, methane levels and releases seen as a small side issue, but the effects may be much larger, faster and more dramatic. Methane having an 80 times effect of CO2, but more heating releasing more methane that causes extra heating. The idea is that things happen gradually, but I could see a chance that passing a threshold into this escalation that such a problem could happen within the period of one decade. The past ancient habitation of certain areas that now seem unsuitable suggests this may be happened previously, and that certain actions such as burying monuments and artefacts for no distinct or discernible reason was an attempt to preserve the local culture in the only quick way they knew how. How many treasure troves of their lives have remained undiscovered after the original owner has disappeared? I would suggest in places of wide open spaces such as the Americas thousands of unknown places of occupation have not been discovered, as nobody has looked, assuming they were always empty or covered in forest.

Is the world the shape it will become. Ice is heavy and the south poles sits on 2.8 kilometres of ice. If that ice is removed it will eventually flow towards mid latitudes as the weight down on the south poles decreases, the earth possibly slowing down slightly as it changes maybe causing tidal surges much larger than at present before it stabilises. Think in terms of ice skating with water being 9% more dense than ice.

With the widescale adoption of large scale mono-species farming comes the risk of predatory species, such as pests and disease. In the past we didn’t have the pesticides, which in themselves carry risks, although through humans evolving we have become more hardened to such pollution, but there is a knock on effect, that we may end up dependent or requiring that level of pollution as we have incorporated it into bodies and lifestyles. Pollution is seen as bad, 0% pollution seen as the ideal that should be worked towards, but we have the problem of evolutionary tolerance, such things stressing us and giving this tolerance. An example of this stressing is muscle development, where lack of use makes them weaken and atrophy. Evolution means that removing it weakens the body and makes it lighter overall as a development. But it also removes the ability to do sustained work with the body, endurance being ‘bred out.’ For every change in environment a species adapts itself to that new environment by natural selection for the most ‘fitting.’

All species seem to work in this way, a disease or pest countering each major change by changing and developing itself, the ones badly affected by such a change dying off and the stronger, more able to tolerate the new situation surviving to produce a new species that doesn’t have the drawbacks. Malaria drugs and antibiotics are a good example of this, where new ways of coping and resistance have developed in the target species response to their indescriminate use. Because of the worldwide spread of Covid-19 it through numbers of cases is developing in a way to evade the current vaccines. Luckily it has developed for the moment into a less dangerous form, but with so many cases of the more dangerous forms out there it may combine to form a much more virulent version at some stage, evolutionarily designed to avoid the current vaccines and methods of attack. In areas where there are people with compromised immune systems harbouring the disease for long periods it has a chance to mutate much more than where people have strong immune systems or are immunised against it.

All of this may be a consequence of environmental change where the new environment is different to the old one, all modifications to plants and animals in a certain way to ‘harden’ them against something which may not be there in the future, and the opposite actually occurs, so this ‘hardening’ in fact ‘softens’ them renerding them less able to handle the new patterns.

Many of the worlds areas and countries have made a move to dependence on single crops. Palm oil in the Pacific area has been one of these moves. All well and good for the economy, as concentrated production, removing other competing species along the way, allows for a very efficient and financially rewarding enterprise. But, the arrival of a disease or parasite that affects the crop, due to evolved specialisation, gives a large probability that at some time those crops will be decimated, together with the economies that depend on them. The loss of diversity means that it is a move from a set of systems between 30% and 80% to it running at 100%, or when things go wrong running at 5%. This is also true for climate change, where a broad band of species that have tolerances between 15 degrees and 30 degrees are changed for a species that operates in the current 20 to 25 degree range. The climate changes to 15 or 30 and the crops fail en-masse.

Powered by WordPress  |  Rethink by InkThemes.